What Is The Reason For The Reduced Efficiency Of The Screw Chiller?

That is to say, due to improper maintenance and maintenance of the equipment, the operation efficiency is low. For example, when the condenser of the refrigeration unit exhibits severe fouling, it will affect the heat exchange effect and cause the overall operational efficiency of the equipment to be low. In addition to the condenser, which is easy to exhibit fouling, such as the transmission mechanism presents a serious wear phenomenon, that is to say, in the long-term operation process, the centrifugal impeller, the transmission mechanism, the upper and lower speed bearings and other important The wear parts of the mobile parts are worn out, so it is easy to incur the lack of efficiency of the equipment.

2. Has a higher load in operation

Since the Water Cooled Screw Chiller often causes the equipment to stop overloading during consumption, under normal conditions, the load operation rate of the refrigeration equipment is preferably 80%, so that the efficiency can be maximized, but the ideal consumption process is often It is difficult to reach this point, naturally, the product is inefficient. 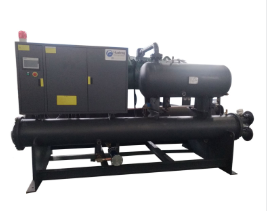 3. The ambient temperature changes too much

The operating elements that the refrigeration equipment needs to focus on at different temperatures, such as the Compressor Protection Water Chiller temperature, will vary. Generally speaking, in the chiller factory, there is an air-conditioning exhaust system to stop the environment from cooling, so that the refrigeration equipment is in a constant temperature environment. However, if such a device that controls the ambient temperature presents a problem, it will eventually cause problems in the operational efficiency of the device.

Although the refrigeration equipment of most chiller plants is not too cumbersome to use, it is often that some fundamental content is easily ignored in long-term use. Or because the operator is the first time the operator, there is no experience in the use of the equipment.

Therefore, the operator of the refrigeration equipment needs to carry out professional technical training in the operation of the machine and should be allowed to operate on the machine after all the inspections have passed.